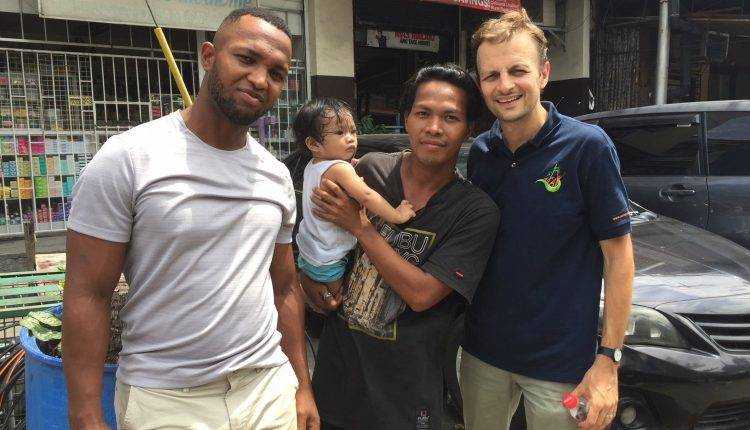 
Idrisse, left, completed the second chance program in France and traveled to the Philippines in 2019 to share his experience. To his right are a Filipino member of the Compassion Asian Youth Association and Laurent Thorigné, who heads the France program after working for ACAY in the Philippines for over a decade. (CNS Photo / courtesy Association Compassion Asian Youth France)

PARIS – When Laurent Thorigné went to the Philippines to work for a non-governmental organization serving minors, he was initially unaware that it had been created by a French nun.

“What struck me was how dynamic the organization was, how full of humanity it was,” Thorigné said. “It was really inspiring. I could feel a lot of hope. The sisters were so full of energy, care. They cared so much about everyone: the inmates but also the volunteers, everyone. Their dedication to their work was very impressive.

The Compassion Asian Youth Association offers the School of Life for women, many of whom have been abused, and the Second Chance program for men, to give a second chance to adolescents and young adults detained after their release from prison. Time spent behind bars is meant to become a useful time, where inmates can think about the choices they want to make for the rest of their lives.

Thorigné spent a summer in Manila in 2003, then an entire year at ACAY, whose work became the subject of his master’s thesis in political science. After completing his studies, he decided to return to the Philippines to work for ACAY for two years. He stayed for 10 years.

ACAY and its programs were started by Sister Sophie Renoux, known as Sister Sophie of Jesus, who founded the Missionaries of Mary in the Diocese of Novaliches, Philippines, in 2007. But every year Sister Sophie has returned to her home. hometown of Marseille, France, to raise funds for ACAY, and Thorigné would also return to France. Together, they gave presentations on the Second Chance program to French high school students as well as to inmates.

Second Chance draws on peer interaction, testimonials from former program students, videos and counseling sessions for offenders to recognize the patterns of behavior that brought them to prison and the opportunities for change when they do. ‘they are released.

“Those who participate in our program are eager to turn the page on their dark past,” Thorigné said. “It is impossible to do anything without their agreement.”

In 2010, a French magistrate in charge of juvenile offenders heard about ACAY’s work. She offered Sister Sophie and Thorigné the chance to discover the reality of the French legal system for juvenile delinquents and young adults.

In France, around 110,000 young people leave school each year at the age of 16 without a diploma or diploma. With high unemployment, they risk engaging in criminal activity. According to a study by the French Ministry of Justice, “more than three-quarters of those sentenced to prison who were minors at the time of the crime have been re-convicted, and nearly seven out of 10 have been re-convicted within five years”.

ACAY’s approach believes that time in detention can be a useful period in which young people can experience the turning point in their lives. ACAY workers offer these young offenders the opportunity to understand the reasons that led them to commit crimes, suggest that they choose to lead a normal life, find their strengths and talents, and teach them how to get a real job or go back. at school.

Thus, when Thorigné decided to return home in 2014, the French management of the Marseille prison for minors offered him and Sister Sophie the possibility of setting up a similar program in Marseille, which holds one of the six prisons in the country reserved for minors. .

The French authorities try to do as much prevention as possible during pre-trial detention. Juvenile offenders should see specially trained educators, psychologists and teachers who prepare for their reintegration into society.

School is compulsory in France until the age of 16. Prisoners attend classes in prison. As in any other school in France, Wednesday afternoon is free of lessons, and there is a two week break every seven weeks. Thus, every Wednesday, volunteers working for ACAY come to visit the detention center to meet the young men, most of the time one-on-one.

During the two-week vacation, inmates can participate in a five-day training session. Through videos and recorded testimonies of former Filipino prisoners, this session aims to raise awareness about the life context of young offenders in other countries and the different stages of recovery.

“The inmates want to discover the experiences that young Filipinos are willing to share. We expect them to express the will to do something with their lives once they are released from prison, ”Thorigné said. “The initiative must come from them. They are at the center of our work. If we don’t put them at the center of our action, it is useless.

Three times a year, in April, August and October, the detainees meet with former Filipinos who share their experiences.

“The inmates are in awe of these guys they could relate to and are ready to listen to them,” Thorigné said.

During the second COVID-19 lockdown in France last fall, Idrisse, who completed the second chance program in France, gave testimony to detainees in Marseille.

Idrisse traveled to the Philippines in 2019 to share his experience with ACAY attendees in Manila. He had been in prison several times before he was 18. He met ACAY volunteers while behind bars and realized that it was possible to start a new life. Now 24 years old, he is a construction worker in Marseille.

He said he was shocked to see the deplorable state of Philippine prisons. He met inmates, told them about his own experience – not much different from theirs, he said – played football with them and realized that everyone can change.

“These young people were listening to me. It gave me more confidence and made me want to do more for them, ”said Idrisse.

Once released from prison, former prisoners are always accompanied by ACAY volunteers. They can also get help from ACAY sponsors. Twelve of the 15 former prisoners supported by ACAY since 2016 are now training for a job or learning a new skill such as driving.

“In general, young people in the Philippines do not have the same access to different forms of support as young people in France,” Thorigné said. “In France, it’s easier to take them for granted, while Filipinos struggle to meet their basic needs. Young people in France do not always see the possibility of training for a new job as a real opportunity, because it is here for everyone, education is free, where Filipinos see going to school as a luck.

Idrisse’s experience with the Seconde Chance program in France and seeing how ACAY works in the Philippines left a lasting impression.

“With ACAY, I understood how, thanks to a very humanitarian approach, any young person could start over and have a different life.

Auvillain is a freelance journalist based in Paris.

Can clubs like Belgrade’s Red Star ever win a European Cup again?

Amazon and the truth about corporate taxes