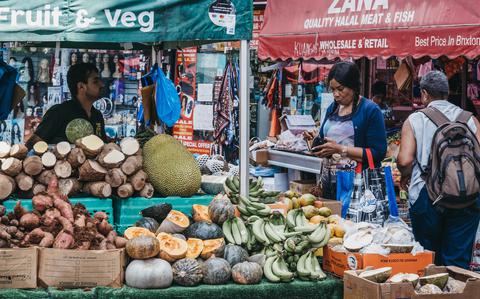 Brixton Market is a multi-ethnic community market in London run by local traders, many of whom have ties to Jamaica and Caribbean culture. (iStock)

While dreams of traveling to distant continents remain just that, the relative freedom of movement of vaccinated, cured or tested travelers across much of Europe gives them the luxury of exploring a variety of settings at a relaxed pace. . Visiting urban environments transformed by the presence of immigrants and expatriates can add a touch of the exotic to any city break. Here are some places where the cultures of the world come together in a friendly way.

Japan in Düsseldorf: This modern but laid-back city on the Rhine is home to Germany’s largest Japanese community. Over 8,000 Japanese residents give the city’s “Little Tokyo” its unique flavor. Visitors can enjoy restaurants, ramen bars, bakeries, supermarkets, bookstores and izakaya style pubs in the neighborhoods that stretch along Immermannstrasse and Klosterstrasse. Other cultural hot spots include the Japanese Garden in the Nordpark and the EKŌ-Haus in Düsseldorf-Niederkassel, the site of a Buddhist temple.

Each year in the spring, the city celebrates this culture within it with the Japan Day, an event that ends with a gigantic fireworks display. If large-scale events were to start again, its next edition will take place on May 21, 2022.

Turkey in Berlin: The capital of Germany is home to the largest Turkish community outside the country, with many residents inhabiting the districts of Kreuzberg and Neukölln. The Turks who came in the 1950s as temporary guest workers to support Germany’s economic miracle and stayed, their descendants and newcomers are all pillars of Berlin’s multicultural identity.

Discover the culture with a scrub and a peel in a hammam, a shave and a haircut from a Turkish barber, a “meze” plate of tapas-type dishes to share, a reading or a purchase of the works of the next generation. from photographers to fashion designers, and a dance party to the latest Turkish rhythms in a club.

Caribbean culture in London: The multiethnic community of Brixton in south London is an enclave for those who can trace their roots to Jamaica, a British colony between 1655 and 1962. Fruits and spices evoking the essence of the island are sold at the market in Brixton, clubs feature reggae performers, and restaurants serve jerk chicken around the clock. Many of the borough’s lively murals refer to island culture.

To experience London’s Caribbean style at its strongest and most proud, plan to attend the Notting Hill Carnival, a parade and street festival that takes place on the last Sunday and Monday in August.

Asia in Leicester, England: A once prosperous industrial area that had fallen into decline has come back to life with the arrival of immigrants from India, Pakistan and other countries. The Golden Mile refers to a stretch of Belgrave Road known for its glittering jewelry stores, interspersed with boutiques selling glittery sarees and fresh produce stalls. The area is also known for its excellent restaurants and confectionery.

Plan a visit for October or November, when the Diwali-related festivities are taking place. In what is billed as the biggest festival of lights outside of India, the street is brilliantly illuminated and the fireworks dazzle spectators.

North Africa in Marseille: Due to its geographic proximity to North Africa and France’s colonial history in the region, Marseille is closely linked to Morocco, Tunisia, and Algeria, three countries collectively known as the Maghreb. .

Near the Old Port and the Panier, visitors can slip into these worlds sipping mint tea, relax in hammams, taste tagines, couscous, pastillas and chickpea soup, or buy spices at the market Arabic from the Noailles Market.

To experience the sounds of Marseille, plan to attend the Fiesta des Suds, a world music festival featuring artists from the Maghreb and beyond; this year’s edition is scheduled to take place October 7-9.

Kyriakos Mitsotakis: How will future generations think of us? | Opinion

Why is internal affairs stopping the CAD team?

United Nations and Indigenous Peoples Working Together for Our Planet – India…