The Greek origins of Marseille, the oldest city in France


The huge port city of Marseille in southern France was founded by the Greeks in 600 BC, when the first immigrants arrived in the area and established a trading colony.

The Greeks are well known for their ancient tales of glory and tragedy, as well as the myriad contributions of their civilization to the very foundations of our modern world.

What less is known, however, is that over the centuries they founded dozens of cities across the Mediterranean that not only exist today, but thrive and play a crucial role in business. of their region.

One of these cities is the huge port city of Marseille, the second largest city in France and certainly among the oldest in Europe.

This was at a time when many Phoenicians left their homeland in present-day Turkey (then in Greek Asia Minor) and reached the northern shores of the western Mediterranean.

They found a place that could easily accommodate a large port and within a few years a new Greek colony had been established. His name was “ΜΑΣΣΑΛΙΑ” (“Massalia”).

The Greek myth of Marseille

The Greek philosopher Aristotle tells us about the myth concerning the founding of Massalia.

According to this tale, Protis, the son of Euxenous de Phocée, married Gyptis, the daughter of a king of a Celtic tribe named Segobriges or Segusiavi, who lived in Gaul, ancient France.

This marriage was the beginning of the history of Marseille.

When the Greek man married this rich and beautiful Celtic woman, the local king gave him the right to obtain land and build his city.

This small colony was the basis of what would become the famous city of Massalia. 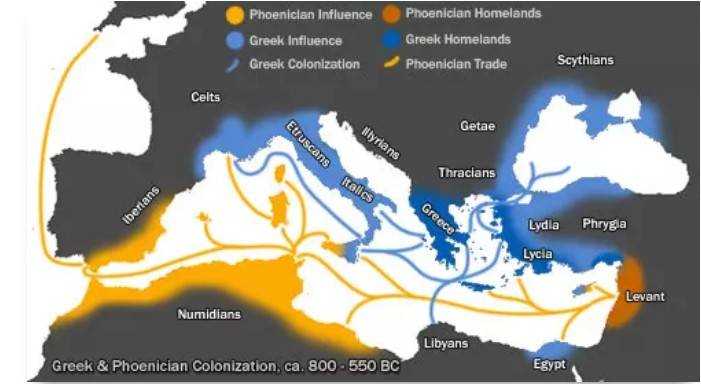 However, this well-known legend may have been refuted, because according to archaeological evidence, the Phocaeans were not the first Greeks to arrive on the northern shores of the western Mediterranean.

The entire coastal region made up of the modern regions of Catalonia, Spain and France had seen the arrival of many Ionian Greeks before this time, on their expeditions to the West to find new places to live and people to trade with.

Nevertheless, the city of Massalia itself was indeed founded by the Phocaeans, because they were the first to settle there permanently.

These early Greek settlers of the port city very quickly established a vast network of trade relations with neighboring towns, not only along the coast, but also in parts of the French mainland, where various Celtic tribes once lived.

The “Massaliotes”, as the Greeks in Marseilles were known, first established good relations with other neighboring Greek colonies in the region from the early stages of their colonization.

These colonies included the towns of Agde (Agathe Tyche, meaning “Good Fortune”), in France; Antibes; Emporiae (the modern city of Empuries in Catalonia); Rhoda (modern roses in Catalonia); and of course the well-known cities of Nice (Nikaia) and Monaco, the cosmopolitan Principality of modern times.

The open attitude towards the outside and favorable to the trade of the Greeks of Marseilles offered to their city the possibility of developing economically and, consequently, to prosper and prosper.

Shipments of Greek goods were constantly arriving at ports in the region, and ancient Gaul was able to form a cohesive and well-established network of communications and relations with the metropolitan areas of Greece through their colonies, especially Marseille.

Over the following centuries, the Marseillais continued to trade with the entire Mediterranean region, and the port grew in importance and size.

As a result, many pottery, works of art, coins and other artifacts from this period have been found all over France, from the south to the northern extremes of the country.

The Massaliotes as masters of trade

This active engagement with the whole region of Gaul made the Massaliotes the undisputed masters of commerce of the time.

Greek currency circulated freely throughout France, local Celtic tribes used Greek themes to make their own coins, and the entire region was heavily influenced by the “soft power” of Greek colonists in trade and commerce.

Their influence has even reached the shores of Great Britain, where local coins discovered in Kent and Surrey have depictions of Apollo. These pieces are believed to have been influenced by the designs used in Marseille.

Of course, over the centuries the Romans arrived, other peoples and tribes came to the shores of southern France, and history evolved.

However, Marseille’s distinctive Greek origins have managed to remain intact in the city’s psyche to this day.

This is why Marseille is a city which, many centuries after its foundation, remains proud of its ancient roots which link its inhabitants to the Greeks, the first original Marseillais.